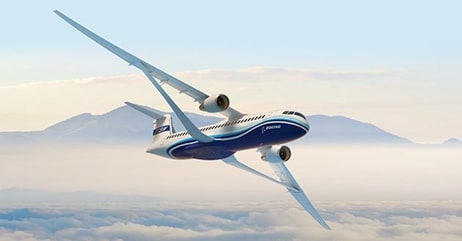 Aircraft fuel is one of the most expensive costs for airlines. Airline companies around the world such as Delta, Emirates, and British Airways are always purchasing new aircraft mainly due to their more efficient fuel burn than older aircraft. Aerospace manufactures are working hard to make their planes as efficient as possible so that they can win airline orders. Aerospace giant, Boeing, worked with NASA to create an efficient aircraft to fly at high transonic speeds. This aircraft concept is called the Transonic Trust-Braced Wing (TTBW).  Boeing came up with the Boeing TTBW concept during its Subsonic Ultra-Green Aircraft Research project, also known as Boeing SUGAR. In this project, they were envisioning what future transportation would look like. They observed better performance can be achieved with this added design compared to aircraft without this configuration. This concept raises questions that expectedly were considered and currently being analyzed.

It would appear adding a beam to an already aerodynamically shaped aircraft would just add unnecessary weight. The heavier an airplane is, the more load it must carry, thus making it less efficient for flight. However, the additional support would allow for a longer wingspan to be supported. The longer wings would produce more lift because of the increase in surface area. Based on analysis and research, the added weigh with wing aspect ratios close to 20 had better performance than shorter wing aircraft without the beam. The beam would also have to be made aerodynamically and not produce a lot of drag. It can not be a simple square plate or a cylinder connecting the fuselages to the wing. Although it would be cheaper for manufactures to create a symmetrical cylinder, the performance would not be beneficial. The bar needs to be “treated like a wing” in the design and analytical processes. Allowing the relative wind to pass over smoothly and minimizing its drag is what will benefit the aircraft’s efficiency. The cruise phase of flight would benefit from an aerodynamic beam since this is where most of the flight time will occur for airlines. The beam will add structural strength to the aircraft. Low wing aircraft, like the 737-800, have “Pickle Forks” which helps to connect the wing to the fuselages and absorb stresses and loads created in flight. For the TTBW aircraft, will an upside-down, smaller pickle fork be created, or will Boeing need to come up with an entirely new concept? These questions can be answered when a final model is established in the future.

The type of engines that will be used for the aircraft will play a significant role in the vehicle. Currently, the most efficient engines used for transonic flight are turbofan engines with high bypass ratios. The greater the bypass ratio, the less fuel is being burnt, which generally means an overall bigger engine. The advantage of the high wing design is advantageous because it allows for these bigger engines to be fitted easier than low wing aircraft. The placement of the engines will also need to be considered because if they are placed at a weak point, too much stress can cause damages to overtime. The placement also would influence the maneuverability and stability of the aircraft when turning. This is important for pilots. A plane used to carry passengers is difficult to fly, then it will not be successful. According to Boeing, their wing will be 170 feet long when measured from tip to tip. A wing this long would not be practical for most airports to accommodate. Boeing came up with the solution of folding the wings. This would allow the aircraft to taxi in airports without hitting structures or more importantly, other aircraft.

The Boeing 777X will be the first aircraft to use this concept. The aircraft is currently going through testing and currently conducting test flights. The joints of the foldable wings will need to be incredibly strong and reliable. These wings will be moving each time the aircraft enters and leaves an airport. Most transonic aircraft today conduct four legs per day. The resistance for these structures to fail, especially during flight, should be optimum. One concern with the foldable wings design is the possibility of them folding when its load limit is experience suddenly, like during hard landings or rough turbulence. Boeing created “gust locks” to prevent such catastrophic events to occur. These locks are important because if one wing involuntarily folds while the other does not in flight, the aircraft could be very difficult to control.

Like any modern aircraft, Boeing TTBW aircraft will need to be as light and strong as possible so that it can be feasible to accomplish optimistic performances. If composites, such as carbon fiber, will be used for the aircraft, it would have a greater weight-to-strength ratio than steel or aluminum. However, composite materials cost more than both steel and aluminum. The material alone does not only cost more but maintaining and repairing composites are more costly. For example, it is safe to drill a hole in an aluminum body but doing so to composites will destroy it. Pricier special tools will need to be used to conduct such procedures.

All airlines want their aircraft to burn as little fuel as they can. Boeing SUGAR project can help with finding a better solution with fuel consumption. Boeing may not be the only aircraft manufacturer to be using a similar design. An aircraft that can be compared to Boeing’s TTBW aircraft is the Cessna SkyCourier. This turboprop is smaller and does not have a foldable wing design like the TTBW aircraft. However, it does have a similar trust-brace wing. This aircraft is also in development and is desiring to fly up to 200 knots. The company likely found positive results using the design Boeing is interested in. Every day, engineers try to improve how we travel from A to B. More research and analysis will be done until Boeing can be confident in building a transonic aircraft with a Truss-Braced Wing.
Email
Facebook
Twitter
LinkedIn
WhatsApp