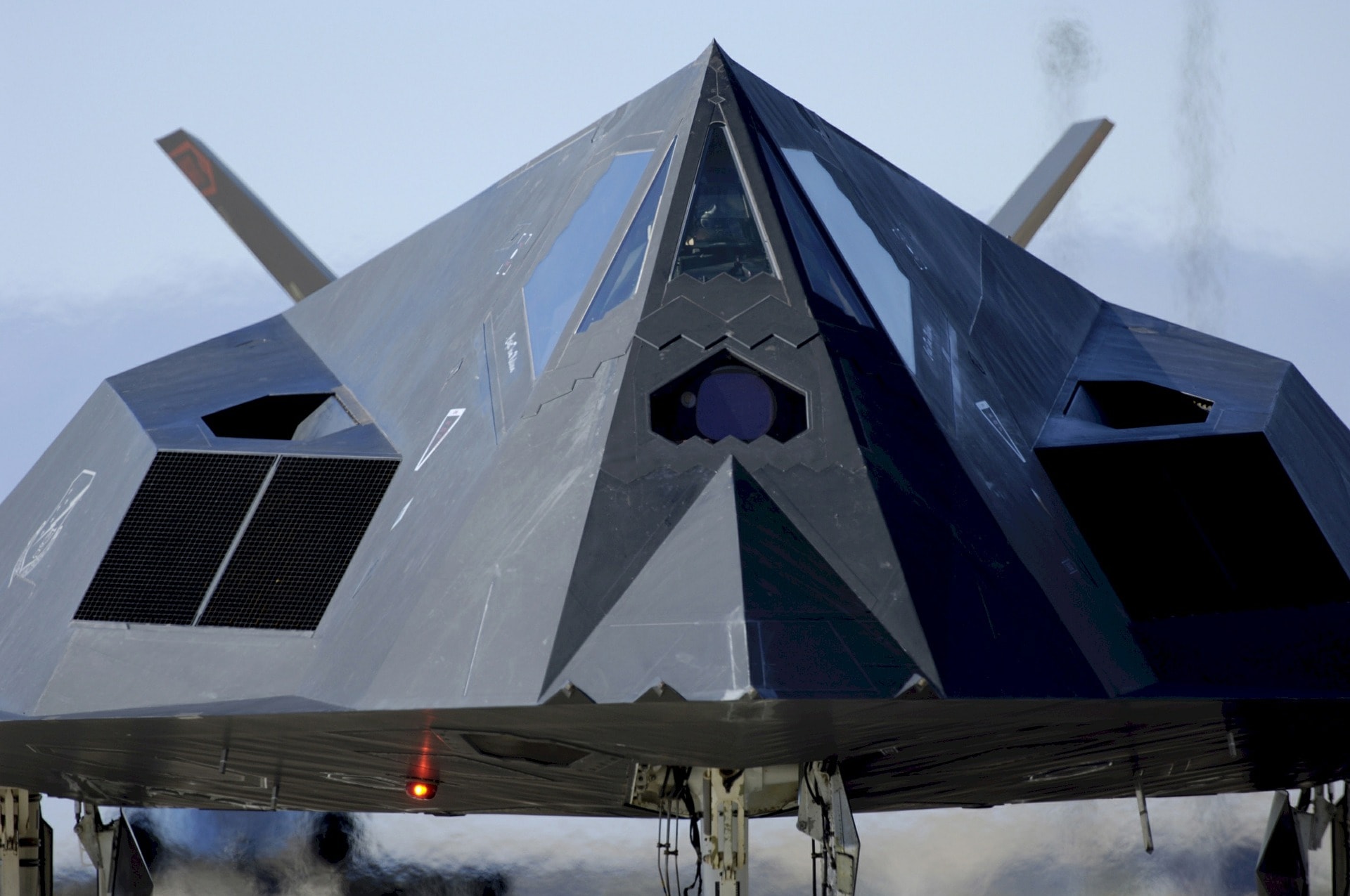 Since the beginning of radar technology, aircraft could have been seen by those on the ground. However, the F-117 Nighthawk was build to “trick” this.

The F-117 is a stealth fighter aircraft. This meant it was configured to reduce and redirect various types of energy. Infrared, radio waves, and more from the plane were all designed to be hidden from detection by other technologies.

It was first flown on 18 June 1981. The aircraft was built because the US military needed a plane that could fly into enemy territory, hit its targets, and get back home without even being detected. They had the SR-71 at the time, but its speed was its advantage to invading incoming missiles.

The Nighthawk was unique and was truly one of a kind at that time. Its stealth made it possible for preventing missiles from firing in the first place! Here are 10 amazing F-117 Nighthawk Facts!

The Nighthawk was the first stealth plane to take the skies. IOC (initial operational capability) was first attained in 1983. NO aircraft had such stealth technologies at the time!

The concept was not entirely new. A lot of engineers that built aircraft during WWII had the idea of sneaking up on the enemy by using such technologies. The Nighthawk was the first aircraft that was capable of going into an area where radar is present and not be clearly detected.

2. The USA Kept It A Secret

Because this was a stealth aircraft used to infiltrate the enemy, the US military decided to keep it a top-secret. They were very successful in hiding the F-117 from the world. The first flight took place in 1981, but the American government announced and confirmed the F-117 was a real aircraft in the year of 1988.

Even then, people had to wait until 1990 to witness its official introduction to the world!

3. Missions Were Only Flown At Night

In fact, if the moon was too bright, the mission would sometimes be postponed!

4. The Unique Design Had Meaning

The whole aircraft was designed with stealth in mind. Everything from engine positions and the type of materials was key factors in stealth. For example:

The only time the Nighthawk was not stealth was when it opens its doors to drop bombs. The aircraft would not have been stealth if the bombs were attached to the bottom. But even then, it would sometimes be too late for the enemy to react after they make it to its target.

To increase the stealthiness of the jet, a special material was coated on the body of the aircraft. It is called RAM, which stands for Radar Absorbing Material.

The material has been calibrated to the ground radar’s wave frequency. When the radar hits the aircraft, they are absorbed and reduces the reflection of the waves. They do not completely absorb all waves from radar, but it dramatically helped the F-117.

The F-117 does not carry a lot of weapons compared to other bomber aircraft. It only can carry up to 2 bombs. Because weapon capacity was low, these bombs have to be precise when aiming at their target.

The bombs the Nighthawk carries have to be very precise. The aircraft mainly carried laser-guided bombs. An example is the GBU-27 laser bomb. When the laser points towards its target, you can bet it is not going to miss!

The F-117 was an unstable aircraft due to its sharp body. This had to be the case in order to keep the stealth shape, even though aerodynamic effects were unfavorable. The aircraft had neutral stability at lower speeds and was unstable at higher speeds.

An ADC (air data computer) was intended to be used when the aircraft past 10,000 feet. At lower altitudes, greater vibrations on the nose (where the probes were located) posed a risk of error readings. Pilots had issues of controlling the plane as they climbed, so they were often turned on before reaching 10,000 feet.

The lead metal was also added in the nose to increase the stability enough so that pilots can take off and climb successfully. New changes were added to the aircraft after its first flight. For example, engineers had to make the “fins” at the back 50% bigger to increase its stability.

The 49th Fighter wing squad was responsible for the flight of an F-117 Stealth hawk to fly from New Mexico to Kuwait without stopping! This was successful with the help of aerial refueling. This was the record for the longest single-seater flight for a fighter aircraft.

9. Its Name Is Deceitful

The ‘F’ in the F-117 name would imply that it is a fighter aircraft. However, it is not! As discussed before, no air-to-air combat took place with the Nighthawk. Only bombing ground targets occurred. Technically, they should have been a ‘B‘ for bomber instead of F.

The F-117 retired its operations on 22 April 2008. With this announcement, you would assume no flying of the aircraft would occur after the date. However, they have been clear evidence of the Nighthawk flying more than a decade later!

They are photos and videos of the stealth plane flying with shocking recent dates. Aircraft spotters reported spotting the F-117 in 2020!

What Did You Learn Today?

The F-117 was truly one of the best at the time. It successfully completed a lot of missions that were assigned and incorporated incredible technologies. What did you learn from this post? Let me know in the comments below!